Home /Uncategorized/The Healing, Humanizing Power of Narrative Medicine
“Instead of, ‘Oh, I see from your chart that you have congestive heart failure, so tell me how your breathing is,’ I started by rolling my chair away from the computer, putting my hands in my lap, not writing, not typing, and said: ‘I will be your doctor, so I need to know a lot about you. Tell me what you think I should know about your situation,’” Charon recalls.

“One woman replied, ‘You mean you want me to talk?’ That tells you something about her prior experience with doctors.”

Charon, a 1970 Fordham graduate, is the founder of narrative medicine, which calls for listening to patients’ personal stories and responding in ways that enhance their care. A Harvard-trained physician and a literary scholar, she is a professor of medicine and the founding chair of medical humanities and ethics at Columbia University. 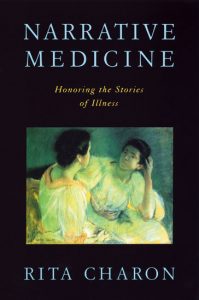 Nonverbal cues are also important, she adds. “As I’m gathering everything I might come to know about this person, I’m listening to her words. I’m looking at her face. I’m noticing her gestures. I’m noticing the smell of her body. I’m reacting to any kind of emotional cues that may or may not be said, all that stuff.”

Charon quickly realized that having the doctor and patient work together to better understand the patient’s condition added value to the typical topline diagnosis. “Some physicians, especially those in the surgical specialties, will say to me, ‘Rita, I leave that for the social workers. I need to find out if the patient can bear weight on the new hip.’ Well, do that, but let’s also address the problem that the patient came to us for help with. And sometimes it’s a social problem. Sometimes they can’t afford the medicine, so they don’t take it. Sometimes it’s, ‘I didn’t want to tell you how much alcohol I drink.’

“With this approach,” she says, “we have a better shot from the start in addressing the problems that the patient herself considers problems, and not restricting that to things that have diagnostic codes.”

‘A Person Who Questions How Things Are Done’

While medicine ran in her family—Charon’s father was a family doctor, and one of her grandfathers was a physician as well—she didn’t plan to follow the same path. She describes her college-age self as a young Catholic kid from Providence, Rhode Island. “My parents let me come to New York only if I’d study with the Jesuits,” she recalls. She began her undergraduate studies at Thomas More College, Fordham’s liberal arts college for women at the time, but switched to the University’s experimental Bensalem College and was part of its inaugural class in 1967. (The college closed in 1974.)

At Bensalem, she says, “we took very seriously questions like, how do you learn, and what is learning? It helped me to become a person who questions how things are done, especially in terms of how we learn and how we grow.”

Charon went on to medical school at Harvard, but returned to New York City for her residency at Montefiore Hospital and became interested in the ideas of the bioethicists, historians, and other scholars working in what came to be known as the medical humanities.

During her residency, the work of Henry James captivated Charon so much that what began as a side interest turned into a doctorate at Columbia University. “I became a literary scholar and an internist at the same time,” Charon says. “My study of literature made me a different kind of doctor, and I realized also that what I knew about medicine contributed to the study of literature.”

In the 20 years since Charon coined the term, narrative medicine has been adopted more and more widely; Columbia, Temple University, Ohio State, and other institutions have begun narrative medicine programs. Charon’s research has won funding from both the National Institutes of Health and the National Endowment for the Humanities, and she is the author of the book Narrative Medicine: Honoring the Stories of Illness (Oxford University Press, 2006). Her workshops attract people from across disciplines.

“I’ve found that when I’m able to enact these narrative techniques with patients and families, I feel a stronger bond with them,” says Dr. Daniel Eison, an oncology hospitalist at Children’s Hospital of Philadelphia who studied narrative medicine with Charon. “Narrative medicine is even more important for patients from a racial, religious, or socioeconomic minority. They’re very disempowered in these settings, and narrative medicine seeks to acknowledge the power differentials and level the field a little bit by letting people’s voices be heard.”

As part of the fight against the novel coronavirus, Charon has been making more narrative medicine resources available to caregivers and working to help clinicians and medical students reduce their social isolation using online tools.

“We’ve had a robust international response to these training sessions,” Charon says. “The creative work they are able to do and the responses they receive from their writing is soul-building, and led one emergency department physician to tell us, ‘I was able to breathe for the first time all week at your session.’”

—Chris Quirk is a freelance writer based in Brooklyn.