Home /Uncategorized/Robert De Niro to 2017 IDHA Graduates: ‘You Are My Heroes’
By Tanisia Morris on June 30, 2017 for Fordham University News.

In his commencement address to the 50th graduating class of Fordham’s International Diploma in Humanitarian Assistance (IDHA), legendary Hollywood actor Robert De Niro urged the humanitarian aid workers to let their “inner humanitarian” guide them into making the world a better place.

The ceremony, held on June 30 at the Lincoln Center campus, honored 25 IDHA graduates and two recipients of the Master of Arts in International Humanitarian Action program. The students hailed from 17 countries around the world, including Italy, Tajikistan, New Zealand, Egypt, Poland, and Pakistan.

Before addressing the graduates, the Oscar-winning actor, whose film credits include Taxi Driver, The Godfather: Part II, Raging Bull, and who appeared most recently as Bernard Madoff in HBO’s The Wizard of Lies, commended his longtime friend Kevin Cahill, M.D., IIHA’s founder, as a “man of great culture and enormous warmth.”

“Like many of you, he had an instinct for finding himself in places where the need was greatest,” De Niro said.

The actor told the graduates that they too were “true humanitarians” because they “served with compassion and dignity” while making sacrifices and taking “heroic risks.”

“Now you’ve gone through this program so that you can perform your work more effectively,” he said. “You have distinguished yourself here, and you will take those lessons with you for the rest of your life.”

De Niro, who received an honorary diploma, said that while many people might solely deem humanitarian workers as “wonderful people doing heroic work,” he considered them “shining examples of what can be achieved when you find the humanitarian hidden inside.”

“By inspiring others, you increase your impact exponentially,” he said before reading the names of the entire graduating class. “You are my heroes,” he told them.

Bart Vermeiren, who delivered the IDHA participant address, said completing the program is a huge milestone.

“We all embark on a new or old journey in our lives, but one day or another, sooner or later, we will use our IDHA wisdom and put it into practice with our learning experiences to the benefit of ourselves, and, most importantly, to the benefit of the people in need,” he said.

It’s a message that resonated with Naomi Gikonyo, a humanitarian practitioner with nearly a decade of experience in emergency response interventions in countries including Haiti, Libya, South Sudan, and Kenya.

“This program has pushed me to apply a lot of what I’ve learned into the field,” said Gikonyo, who works as an emergency preparedness and response officer for the United Nations World Food Programme. “It’s instrumental because we’re dealing with humanitarian crises with high complexities.” 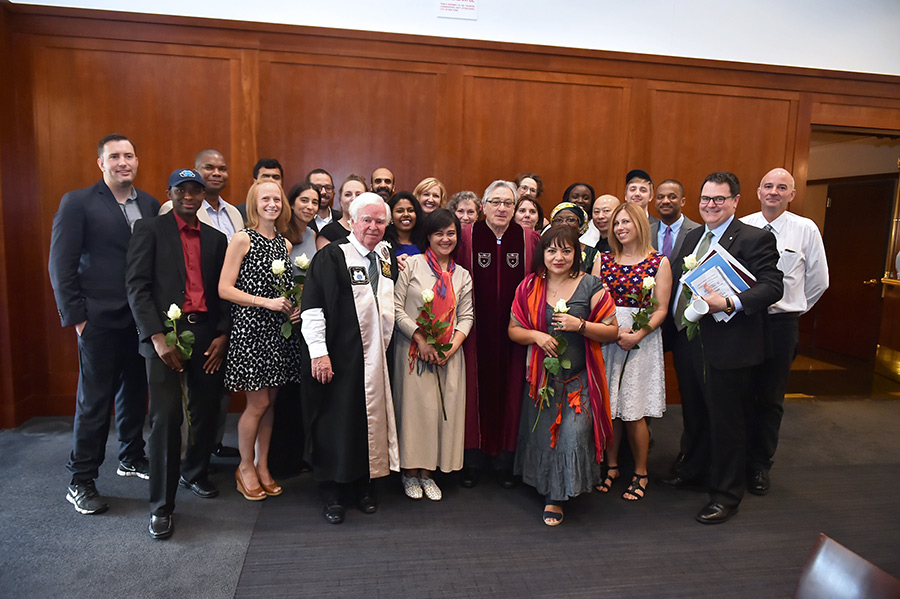 Dr. Cahill told the graduates not to be afraid of the challenges ahead. “You have the ability to go over barriers, to not be blocked in by academic barriers or those barriers that separate us from each other,” he said.

Brendan Cahill, executive director of the Institute of International Humanitarian Affairs (IIHA), said IDHA ceremonies have been held around the globe, from Dublin and Berlin to Seoul and Pretoria.

“We are in that unique position that we’re not in uniform, but we find ourselves on the front line,” he told the graduates, whom he said are leading emergency medicine in makeshift hospitals, opening schools in remote camps, and “staying on when others have left.”

“Stand up for you values, and your beliefs. Do what you want to do. Be bold and be brave.”