Home /Uncategorized/Mapping Conference Tackles Justice Issues from a Geographic Perspective
In a three-day symposium titled “Mapping (In)Justice,” dozens of scholars came to Fordham’s Lincoln Center campus from Nov. 7 to Nov. 9 to examine how digital mapping is being used by academics as a methodology to study justice and injustice, particularly when researching underserved communities. 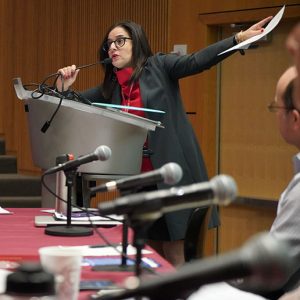 Gregory Donovan, Ph.D., assistant professor in the Department of Communication and Media Studies and co-founder of the Fordham Digital Scholarship Consortium, organized the conference with department chair Jacqueline Reich, Ph.D.

Instead of paying a fee, conference-goers were asked to send donations to Goddard Riverside at Lincoln Square Neighborhood Center, which offers services to the Amsterdam Houses across the street from Fordham’s Lincoln Center campus.

Digital mapping is a process that merges data with maps to create a virtual online image that can be static or interactive. Donovan said focusing on social justice issues through the lens of digital mapping allowed for a cross-disciplinary approach that wouldn’t ordinarily be found at a typical geography conference. Professors came from a variety of disciplines, including history, art history, urban planning, Latinx studies, psychology, social work, and education.

“Spatial media have politics, these are not neutral things,” said Donovan, who teaches a course of the same name as the conference for the Masters in Public Media.  “We need to look at how our subjects are using digital mapping in their own lives and not just use this technology to study them from afar, like a scientist with a clipboard.” 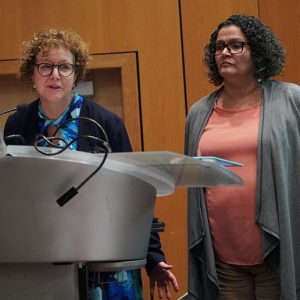 In panel titled “Mapping the Local: A Focus on New York,” Jennifer Pipitone, Ph.D., assistant professor of psychology at the College of Mount St. Vincent, and Svetlana Jović, Ph.D., assistant professor of developmental psychology at SUNY Old Westbury, presented research that essentially handed the digital “clipboard” over to the Bronx Community College students they were teaching —and studying. At the time, the two were writing fellows at the college.

In an effort to map what “community” meant to the students, the researchers used geo-locations of photos taken by the participants “in order to illustrate and make sense of their experience of belonging in the city,” they wrote in the abstract. The maps revealed that students restricted their movements to above Central Park, “delineating participants’ lived boundary of race and class.” The method is referred to as “participatory action research.”

Throughout the conference, dozens of examples were given on how mapping technology can be used to heighten consciousness and problem solve. Adam Arenson, Ph.D., associate professor of history at Manhattan College, also on the Focus on New York panel, talked about how he worked with his students to help map slave burial sites in the Bronx, many of which sit unmarked on New York City parkland.

“These are all ways to memorialize the injustices of the past, to map them in the landscape and to be aware of them,” he said. “Though the information is incomplete, and we must do what we can to fill out the map, make the connections, and demonstrate how the injustices of slavery still shape New York City today.” 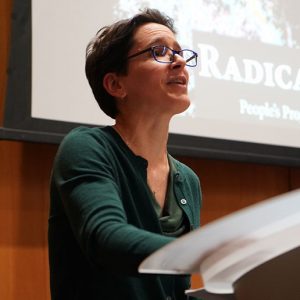 In her keynote address later that day, Sarah Elwood, Ph.D., professor and chair of geography at the University of Washington, took a theoretical look at how mapping with communities through participatory methods helps “unprivilege the map,” thereby making it less of a colonial process.

As one of the early theoretical thinkers in the field of geographic information systems, known as GIS, she said she is still learning how to infuse her work with “critical race thought” that has surged in academia over the past five years. After the lecture, she recalled a moment at a mapping justice conference in Baltimore when she noticed the diversity of the participants.

“I looked around the room and I realized that it was a different room than one that I had ever been in, in this critical mapping world,” she said. “It was full of activists and young scholars and people of color, queer folks, thinking and theorizing in ways that were not part of my first 20 years in this field.”

She called the moment an “epiphany.” She said while she continues to incorporate Marxist critique that allows her “to get at some structural processes of inequality” in mapping, her work is now heavily informed by black feminism, queer theory, and Latinx studies.

“Once you’ve had an epiphany like that, it’s like, ‘Well, duh, obvious!’ but yet, you’re also embarrassed that it’s taken so long for this epiphany to happen,” she said. “I always think, in those moments, ‘Thank God we have our whole life to become ourselves.’”