By Avinoam Idhe for The Bronx News.

Fordham University has launched a Food Recovery Network program with Sodexo to combat food waste and hunger. As part of the program, student volunteers help recover surplus food from campus dining halls and deliver it to its partner agency, Part of the Solution (POTS).

Sodexo is one of the largest food service and facilities management corporations in the world. The company is the provider for Fordham University dining services. Founder Pierre Bellon launched Sodexo in Marseille, France, in 1966.

“Food is universal and communal and it brings people together, this program makes us feel like were a part of the (hunger) solution,” says Patterson.

POTS is a local soup kitchen located on Webster Avenue, not far from Fordham University. According to its website, “POTS is a ‘one-stop shop’ assisting individuals living in poverty on their journeys from crisis to stability and ultimately, self-sufficiency.” 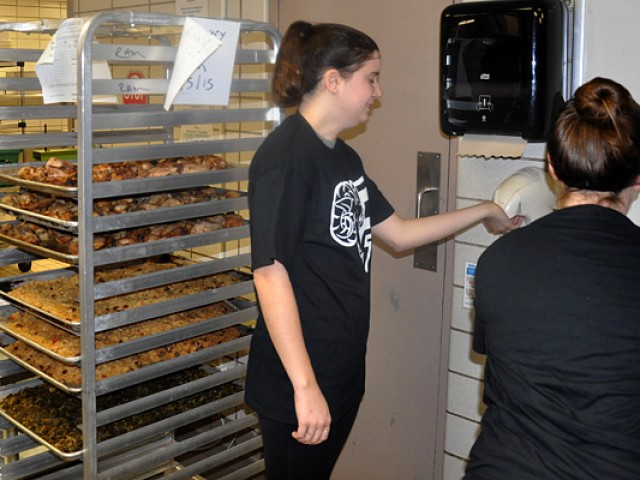 Fordham University, Sodexo, and POTS all seem to have a common goal in this initiative, and that is addressing the issues of hunger and food waste. According to statistics from 2014 on FeedingAmerica.org, 46.7 million people were living in poverty in the U.S. and 14 percent of households (17.4 million households) were food insecure.

Taina Rodriguez is the Emergency Food Program Manager for POTS. Rodriguez is also a former client and started as a volunteer. She said POTS provided food for her family when they ran into financial difficulties.

“I wanted to provide for other people what (POTS) was able to provide for me and my family,” Rodriguez says, describing her motivation to join the team.

Rodriguez says there is huge misconception about soup kitchens in general. She says many of their clients are not homeless and are actually working-poor families, veterans, and even some people with college degrees. Rodriguez says the type of clients POTS serve reveals a larger issue of poverty in the United States.

“It tells you a lot about what our government (needs to do), there shouldn’t be veterans or people working 40-60 hours still having to come to a soup kitchen because they have to pay bills,” says Rodriguez. “Yes we do have homeless but it’s not the perception that people think.”

Keith Bell has been a chef at POTS for 11 years. Like Rodriguez, Bell was also a former client of POTS and began as a volunteer. He says his job is his way of giving back to the community–as well as the organization– for helping him when he was struggling.

“Putting a smile on a person’s face (by providing them food) is what makes me happy,” a smirking Bell said while describing what he found most rewarding about the program.

The cooks and chefs who prepare the food at the University are aware of, and able to estimate, the amount of food waste. A machine weighs and records a picture of the food, and also estimates the dollar amount of the food being donated. The foodnetwork program gives Fordham students the chance to volunteer in the kitchen packaging food and then delivering it to the surrounding community.

“POTS is a really great organization and the fact that were able to provide food (for those in need) is awesome,” said student/volunteer Allyson Ferrante.