We’ve all heard the cliché “reading is fundamental,” but for many, getting access to books is a real hardship. That’s where Bronx native Brandon Montes, FCRH ’13, comes in.

Montes founded the Norwood Community Library. It’s essentially a mobile library: Montes fills a crate or two with free books for passersby and sets up shop on the sidewalk—on East Gun Hill Road between Wayne and Bainbridge Avenues in the Bronx—for an afternoon every weekend. The day varies, but typically, from 11 a.m. to 4 p.m., anyone is welcome to stop by, chat with Montes about their reading preferences, and grab a book.

At Fordham, Montes majored in communications and media studies with a minor in psychology. He currently works for the Research Foundation at CUNY, supporting the New York City Administration for Children’s Services’ Workforce Institute. As coordinator of supervision and coaching, he’s part of a team that teaches coaching skills to supervisors and managers working in youth justice and child welfare.

Montes started the library in 2018 as a way to combat what he sees as a systemic problem around literary access. “For a long time, we didn’t have a bookstore here—an independent bookstore—in the Bronx,” he said. “What does that say about us reading here?”

Wanting to help, Montes gathered his extra books, asked around for donations, and the Norwood Community Library was hatched. “I like to call myself the street librarian,” he said. “We could all be street librarians: Anyone can take two crates and do the same exact thing.”

Since its inception, Montes’ library operation has grown quite a bit. Though he says he’d like to partner with publishers to expand his inventory, for now it remains community-driven—making it all the more impressive that Montes estimates his book inventory, housed in a closet in his apartment, numbers in the hundreds. He receives donations from neighbors, current and former educators, and others who have found him through the library’s Instagram account. 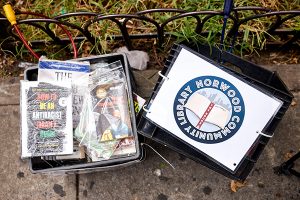 “It’s a pretty small operation. But, at the same time, a lot of community has grown from it,” he said. “I got to speak to some 6-year-olds last year about helping out the community at a school nearby. When I’ve been able to talk to younger people about reading and stuff like that, it’s been very rewarding. In instances like that, I felt like my education is coming full circle.”

Like everything else this year, the COVID-19 pandemic has caused Montes to make some changes to how the Norwood Community Library runs. Before the pandemic, the book selection on any given Sunday was chosen randomly, and Montes would usually drop the crates off, secure them, and come back later. ­­Now, he takes precautionary measures to help prevent the spread of the disease.

“I disinfect the books and I wrap them in plastic,” he said, adding that he now fills the crates with whatever books are processed and ready to go. He also wears a mask and gloves, and sits by the crates at all times to ensure that he is the only person touching the disinfected books. “I don’t want to be a super spreader,” he said. “I engaged people on what would make them feel safe.”

When people approach the library crates, Montes talks to them about what they like to read and makes suggestions based on the selection he has with him. Every weekend is different, he said: Some days he gives away a lot of books, and some days it’s just a few.

In addition to his crate selection, Montes also coordinates giveaways of specific titles. He recently met his fundraising goal to give away 50 copies of An African American and Latinx History of the United States (Beacon Press, 2018) by Paul Ortiz. Montes found the title on a list of anti-racist books for educators, read it, and then led a workplace book club discussion about it.

The giveaway will be some time in November, Montes said, and anyone interested can follow the library on Instagram to see updates. On Oct. 11, he’s planning to give away 50 copies—25 in Spanish and 25 in English—of Animal Farm (1945) by George Orwell. For the two giveaways, Montes plans to set up a table with music at 2 p.m., and distribute the books first come, first served. 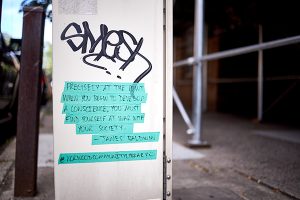 But Montes doesn’t just want to give books away, he wants to transform Norwood itself into a library by posting quotes from writers associated with the Bronx around the neighborhood.

“I thought, ‘How can I do something a little different that’s going to get people’s attention when I’m not out there with the books?’” A fan of graffiti and street art, and a street photographer himself, Montes decided to use painter’s tape “because it’s non-destructive. Eventually, if you were so against it, you could peel it off or the elements will have it peel off.”

People who want to get involved with the library virtually can join its book club. The first meeting, scheduled for Oct. 3 on Zoom, will feature a discussion on Sister Outsider: Essays and Speeches (1984) by Audre Lorde. Montes said he hopes to keep the book club going with meetings every couple of months “because I think there’s a good opportunity there to have some candid and crucial conversations.”

What’s the best piece of advice you’ve ever received?
If we are going to change our life, it’s up to us.

What’s your favorite place in New York City? In the world?
For both answers, I will go with the terra firma that is the Boogie Down Bronx.

Name a book that has had a lasting influence on you.
The Diamond That Cuts Through Illusion by Thich Nhat Hanh. This is Hanh’s interpretation of the Diamond Sutra. Words that really stuck with me were: “We must lead all beings to the shore of awakening, but, after these beings have become liberated, we do not, in truth, think that a single being has been liberated.” Also, Água Viva by Clarice Lispector. “Where am I going? and the answer is: I’m going.”

Who is the Fordham grad or professor you admire most?
Rest in peace, Adrian Nolasco, FCRH ’13. He passed away earlier this year and was one of the first friends I made in undergrad. If you ever had a chance to meet Adrian, you’d agree that he was 1 of 1. There was no one else like him.

What are you optimistic about?
I am most optimistic about the power of education. I think more and more, people are thinking about the future they want to live in. Although it’s hard to imagine right now, things will change for the better. And it could happen a lot sooner than any of us anticipate.