Responding to it is another matter though. David Gautschi, Ph.D., dean emeritus, and Joseph Keating, S.J., Professor of Marketing at the Gabelli School of Business, says businesses have a key part to play in the challenge.

Two years ago, he and international energy executive David Nagel launched Forum2100, a video streaming website that features talks by primarily private-sector leaders who share the latest research and trends in the field of energy development. 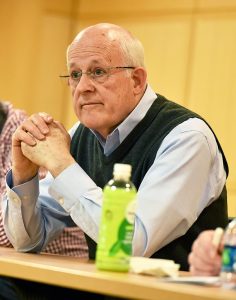 Gautschi said he became interested in energy while on sabbatical at the École Polytechnique Fédérale de Lausanne (EPFL), a research institute and university in Lausanne, Switzerland. He became convinced that energy sources that emit less carbon are within our grasp.

“The more I studied this, the more I realized we have the technology we need; it’s people who are in the way. Businesses just need to figure out a way to move the dial and become agents of change,” he said.

After meeting Nagel, a former vice president at BP America, the two decided to produce a series of TED-talk style lectures, free to anyone with an internet connection.

The first “Business & Energy Talk,” as they dubbed it, featured the founders of AirMiners.org, which is dedicated to a business-based approach to capturing carbon dioxide, sequestering it, and turning it into products. It was broadcast on the Zoom platform, which allows viewers to submit questions that Gautschi could ask the speakers. It was archived on both the Forum2100 website as well as YouTube.

In all, 13 talks have been held. The most recent was Jan. 21, when Gregory Nemet, Ph.D., professor of public affairs at the University of Wisconsin-Madison, delivered “How Solar Energy Became Cheap: A Model for Low Carbon Innovation,” also the title of his 2019 book.

Gautschi said the goal of the talks, which have featured topics such as the potential use of ammonia as fuel and the role of energy in sustainable development in Africa, is to shift the current discourse, which too often demonizes industry as the root cause of the problems we currently face.

“You can go anywhere in the world, to any economic system, any political system, and you will run into businesses. It’s the cockroach theory. You cannot suppress them. You can see one? Boom, here comes another hundred,” he said, laughing.

“Since it’s so persistent, my hypothesis is, there must be some kind of redeeming value to this form of human activity. So let’s see if we can find instances of people trying to do good things, and behold, there’s a lot.”

Although some of the talks are heavy on the technology, most are about new business models and new ways of framing the problems, he said.

The issue reminded him of the path he took when contemplating ethics in business. Although there have been many robust conversations about what an ethical business looks like, he said, he noticed that the topic only seems to really resonate when there’s an economic downturn like in 2001 and 2008. So maybe the better, more timeless question to ask, he realized, is “What is the purpose of business?” The issue of sustainability, he said, could likewise be examined through that larger lens. 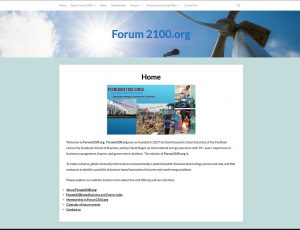 The Forum2100 website, where lectures dating back to 2018 are archived.

The same sort of thought pattern brought me to this whole issue of sustainability. I don’t know what people are always inferring when they use the word, of if they even know what they’re talking about,” he said.

“So you have somebody like Greta Thunberg, who I think is a brave young woman, and her emotions and her arguments are certainly legitimate. But there is nothing that is pointing to a path of action that could resolve the problems. So that’s what led me to think, ‘I can’t talk just about sustainability, because it means it’s just an emotion.’ We need to talk about what’s fundamental to sustainability, which is energy. Energy is everything.”

Viewership for the lectures is still modest, with 200 subscribers worldwide receiving updates on the newest talks. Live talks have received between 25 and 75 views, although archived versions have received additional views. Gautschi is encouraged by the response he’s gotten from viewers so far though, and also notes that it has informed Innovation in Business and Energy, a class he taught last semester.

Learning Outside of the Classroom

Deirdre Coolidge, GABELLI ’20, took the class as an elective, and although energy was not her main interest, she found the topic to be so interesting that this semester she’s spending her Saturdays auditing Gautschi’s class The Real Green Deal.

“I have kids, and I’m really concerned about the future for the world, and what we’re leaving behind,” said Coolidge, who markets annuities for New York Life.

“One of the things I learned in his class is, our country is energy independent at this point. So, I want to know, why aren’t we making better decisions? If we’re operating from a position of strength, why aren’t we investing in green technology and working toward a better system for our aging infrastructure?”

The forum was a great way explore the topic beyond the classroom, she said, adding that the episode that highlighted the Swiss-based startup Softcar was particularly interesting to her.

“The talks are completely on topic, on point, and you could drill down a little deeper with these webinars. They’re great opportunities to build your knowledge base outside of the classroom.”

The next Forum2100 lecture, is scheduled for Tuesday, Feb. 18, at 11:30 a.m. It will feature the owner of searCH4power, a firm working to harness excess methane generated during oil production to power bitcoin mining.