Earlier this spring, Paul Campion of Loyola University Chicago and I dedicated one minute of our graduation speeches to demand action on climate change. We spoke as members of the Class of Zero, a new campaign encouraging graduation speakers to call for “zero emissions, zero excuses and zero time to waste.” While I have a background in renewable energy, it was not the science that motivated me. It was my faith.

Last fall, I met Marquetta Goodwine, or Queen Quet, an alumnus of Fordham University. She is the leader of the Gullah/Geechee people, a group of African Americans who inhabit land stretching across the American South and identify with a mix of Creole and African culture. It is no exaggeration to say that someday the Gullah/Geechee land may simply slip into the sea.

At first, I assumed Queen Quet and I would have nothing in common. She has been invited to present at meetings sponsored by the United Nations; I sometimes snuck into U.N. briefings as little more than the coat check girl. What bound us together, however, was our shared Jesuit education. As a fellow Fordham graduate, Queen Quet credits her alma mater with training her to be a leader and giving her connections at the United Nations that have sustained her advocacy for climate justice. She, like Paul Campion and other environmental leaders I have met, is driven by not only science but also faith.

Students like me are the generation of “Laudato Si’.” By the time Pope Francis met with Greta Thunberg, many of my friends and I had already joined the student walkouts she inspired across the world to demand action on climate change. Inspired by the Ignatian value of faith in action, I wanted to do more than sit in biology class.

I joined the Class of Zero and spoke of the climate crisis at graduation partly for Queen Quet but also for myself and others my age who look to the future with more fear than hope. And I joined the campaign for the people my age I will never meet—those who were not as lucky to escape the fires that ravaged my east Tennessee homeland and those who lost their lives in cyclones, floods and hurricanes that have made headlines and shattered lives since my fellow students and I first set foot on Fordham’s campus.

The president of Fordham University, Joseph McShane, S.J., is fond of saying, “To whom much is given, much is expected.” I have learned from Father McShane that to truly live the ideals of our Jesuit education, we must embody “bothered excellence,” concerned with the world outside our gates.

Last spring, Fordham signed a climate declaration backed by the U.S. Conference of Catholic Bishops. We are also a client of New York City’s largest solar array, which has the potential to help lower energy costs for many outside our campus. For families struggling to make ends meet, anything that helps keep the lights on can be life-changing. For those living in poverty around the world and most affected by climate change, we have a moral duty to act, as powerfully stated by the pope earlier this June.

Is it possible to turn the tide, or have we already crossed critical tipping points? The Southern faith traditions I was raised in—the mantle of Dr. King carried by the modern Poor People’s Campaign—hold that there is always time to do what is right. I firmly believe joining the Class of Zero will not have been in vain. At the very least, I will know that I did not do nothing.

In “Laudato Si’,” Pope Francis says that all life is created with a purpose. “Soil, water, mountains: everything is, as it were, a caress of God,” he writes. Perhaps it is naïve to believe that students like Paul and I were placed here for a purpose. Yet the very essence of faith is to believe in something beyond a random, meaningless existence.

My Jesuit education has guided me toward a path of service for the common good. Like Queen Quet, Father Daniel Berrigan and other Fordham Rams before me, I choose to pay it forward, not simply in a speech but in action. It is truly a blessing to graduate from a school like Fordham and it is my pledge to do what I can to pass on that blessing, wherever my life may lead. 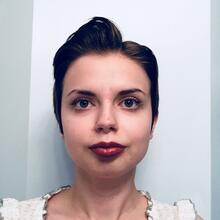 Robin Happel is a graduate of Fordham University. She is originally from Jonesborough, Tennessee, and is a member of several Appalachian writing and activist groups, such as the North Carolina Folklore Society and the NAACP.