Fordham junior Olivia Greenspan first became passionate about economic and environmental issues as a high school student living near Georgetown, Connecticut. There, a once-thriving wire mill had long since become a blight on community development.

“This wire mill was in operation from 1848 to 1998,” Greenspan said in a November TEDxYouth talk she gave in Brookline, Massachusetts. The company that owned the site, Gilbert & Bennett Manufacturing, was innovative in its day. “They invented wire mesh there,” she said, which “allowed people to open up their windows with their new screens and enjoy the warm summer air without letting mosquitoes and other bugs inside their homes.

”Today, alas, the mill “lies derelict” and is classified as a brownfield site, contaminated by decades of metal manufacturing. “We’re not creating jobs, we’re not generating tax revenue, and we’ve really lost our heritage of the industrious working spirit that once existed there,” she said.

But where others see decay and waste, Greenspan sees potential.

A Sustainable Approach to Redevelopment

Five years ago, she and several other students responded to a call from local artist Jane Philbrick to examine ways to clean up and redevelop the site. What began as a high-school internship has become a vocation for Greenspan. With Philbrick, she is now a co-founder of TILL, a community-based real estate development company that is looking to transform the old site into a live-work space that would be anchored by artists and include commercial businesses, such as an indoor farm. And they’re aiming to do it in a way that can be applied to other brownfield sites throughout the country.

In addition to her usual coursework as a full-time economics major at Fordham, Greenspan spends hours each week studying real estate law, urban farming, phytoremediation, carbon storage, and other subjects with practical applications in an environmentally challenged world. “I find it very purposeful to work on this,” she says. 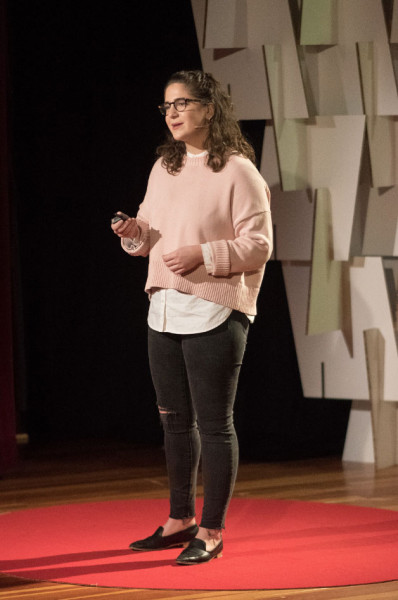 Greenspan speaking at the TEDxYouth event held on November 4 in Brookline, Massachusetts. (Photo by John Werner)

She points out that the built environment is “the largest contributor to global greenhouse gas emissions”—which is why she and members of her TILL team plan to use solar panels and heat pumps as part of their development model. But they aren’t letting carbon emissions embodied in the built environment off the hook, either.

“The steel and concrete we manufacture to pave over surfaces and build buildings emit many tons of CO2 into the atmosphere every year,” she said. “So the central question for our team became: Wouldn’t it be great if we could turn large-scale real estate development into sites for CO2 storage, as opposed to the carbon factories they currently are?”

She said they’re proposing to use plants to “capture excess carbon in our atmosphere,” and to build new structures with cross-laminated timber, a type of engineered wood that, like all wood products, can store atmospheric carbon.

At Fordham, Greenspan is president and co-manager of St. Rose’s Garden, a community plot near Faculty Memorial Hall, and she’s a student leader in the Social Innovation Collaboratory, a group of faculty, students, and administrators who promote social entrepreneurship.

Carey Weiss, the director of sustainability initiatives at Fordham, describes Greenspan as “an outstanding student thought leader,” someone who “leverages her coursework and outside interests to continually seek new ideas and methodologies for creating a better society.”

Greenspan is grateful for the “supportive network of thoughtful, interdisciplinary thinkers” at Fordham. Studying economics has aided her immensely in her work with both TILL and the collaboratory, she said.

“I am not naturally inclined to think about economic policy. But my classes have forced me to consider other perspectives, to view a problem from many different angles.”

Looking beyond graduation, Greenspan’s heart—and head—are with TILL.

“What began as a problem specific to my community in Connecticut has transformed into a solution that can be applied globally to slow down climate change,” she said in her TEDxYouth talk. “There are 2 to 3 million brownfields in the U.S. alone. What if we turned every one of these brownfields into economically productive carbon storage sites? That is a world I want to live in.”