If your house burns to the ground because of a wildfire, an insurance agent can estimate how much it was worth based on its market value.

But if an animal or plant goes extinct because its habitat is destroyed as a result of climate change, there is no way to assign an “existence value” to it.

Thanks to a $750,000 grant from the National Science Foundation, Marc Conte, Ph.D., an associate professor of economics, is embarking on an ambitious five-year-long project to rectify that.

“Understanding the Coupling Between Climate Policy and Ecosystem Change,” a collaboration with Frances C. Moore, Ph.D., and Xiaoli Dong, Ph.D., both assistant professors in the Department of Environmental Science and Policy at the University of California, Davis, seeks to update and expand the current estimates of the cost of carbon on society. 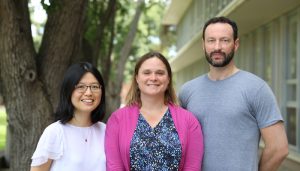 Conte, a co-principal investigator, said the goal of the study is to give government leaders better tools as they debate policies such as carbon taxes.

“We’re trying to motivate climate change policy through an understanding of the benefits and costs of those policies, acknowledging that when we suggest reducing greenhouse gas emissions, we’re going to be imposing costs on certain industries that will then be passed on to different households,” he said.

“Because of that, we want to make sure we are creating a policy with benefits that exceed its costs. The way we can do that is by understanding the full damage of each additional unit of greenhouse gas that we emit into the atmosphere.”

Recent findings by the scientific community have made apparent the need for a better understanding of the economic benefits of say, a white rhinoceros or American pika.

Last year, the United Nations predicted in a report that the world is on track for an increase in greenhouse gas emissions. A separate report found that around 1 million animal and plant species are now threatened with extinction, many within decades.

Conte said reports such as these have made plain the need to expand upon the foundational integrated assessment models (IAMs) that economists have used for nearly 30 years to link economic activity and climate outcomes. The best known example is the Dynamic Integrated Climate Economy (DICE) model, for which William D. Nordhaus, Ph.D., of Yale University was a co-recipient of the 2018 Nobel Prize in Economics and which is described in Managing the Global Commons: The Economics of Climate Change.

When Nordhaus initially calculated how high a tax should be to offset the damages caused by carbon emissions, there was greater uncertainty about the timing and impacts of climate change, and the ecological effects of climate change were omitted from the model, due to both the uncertainty about the magnitude of these effects and the challenge of valuing these impacts in dollar terms, Conte said.

In subsequent years, technological advances have reduced the costs of mitigating greenhouse gas emissions, so economists have adjusted the cost functions in climate IAMs accordingly. Additionally, progress has been made in valuing nonmarket environmental amenities, which can include the existence of various plant and animal species as well as the benefits that accrue to humans from functioning ecosystems.

“The intent of this project is to provide policymakers with a more comprehensive understanding of the tradeoffs associated with greenhouse gas emissions, which we will attempt to do by incorporating the ecological damages of climate change into the damage functions used by climate IAMs,” said Conte.

A Challenge Both Daunting and Necessary

If the idea that assigning a dollar amount to all the flora and fauna that might be affected by climate change sounds like an impossibly complicated task, Conte does not disagree.

“These values are controversial and difficult to measure, but we plan to utilize the best-available methods, and to introduce some novel approaches to generate credible estimates,” he said.

To do that, the team is assembling a large database of existing studies, to get a sense of how much value people attach to environmental amenities, including wild animals. Many studies have been conducted by researchers, government agencies, and conservation groups to inquire about the dollar value that people attach to these amenities, including so-called “charismatic mega fauna” like grizzly bears, tigers, and whales.

“These studies attempt to answer several questions, including: What is the value that you assign to either the existence of elephants in general, or maintaining the elephant population at its current level? What is it worth to you to prevent a decrease of some amount, or to achieve a population increase?”Conte said.

“There are numerous ways to pose these questions, and we’re going to do our best using a large database of these studies to try to come up with a credible means of assigning value to as many different species and environmental amenities as we can.”

A big challenge inherent in this approach is that most of this kind of data has been collected in North America or Europe. Climate change, however, affects every corner of the globe.

“If we are interested in valuing changes in the function of wetlands in Vietnam or Bangladesh but lack existing estimates in these regions, how should we proceed?” he said.

“Can we modify the estimated value of wetlands in Indonesia in a way to make it relevant to conditions in Vietnam and Bangladesh? What about estimates from wetlands in New Jersey? Is there a point at which the differences between the study sites and the places impacted by climate change are sufficiently large that we are not comfortable transferring values across sites?”

And of course, Conte noted, there are still species on the planet that haven’t even been discovered yet, making it impossible to be comprehensive.

“Our estimated values will be lower-bound estimates, based on the information that we have available. The emphasis will be to highlight the implications of presenting a more comprehensive and accurate accounting of the impacts of climate change to policymakers,” he said.

“We hope to offer some methodological contributions that might be of use as we continue to improve our understanding of the complexities and interdependencies in our world and their implications for climate policy.”

Top photo caption:  Can you put a dollar amount on the life of an elephant?