Coss Marte does not need help starting a business.

In fact, Marte is by any measure a success story. After serving time in prison for drug dealing, he returned to his native Lower East Side and opened ConBody, a boutique gym where New Yorkers learn a workout regime that he taught himself in prison—one that enabled him to lose 70 pounds in six months.

“Our whole mission is to hire formerly incarcerated individuals. We have a contract where we go to Rikers Island and train inmates to become certified trainers,” he said.

“We’re giving them skills they can use when they come out.”

But Marte wants to take his business to the next level.

Enter Fordham Law School’s Entrepreneurial Law Clinic. The clinic, which is run by professor Bernice Grant recently brought together students from the Law School and the Gabelli School of Business to work on behalf of four businesses that are either just getting started, or like ConBody, looking to expand. 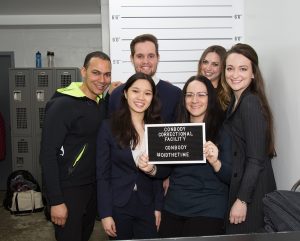 In addition to ConBody, students affiliated with the Entrepreneurial Law Clinic work with other businesses that are either social ventures seeking to create positive change in society, or companies founded by low-to-moderate income entrepreneurs

“Maybe a client is thinking about how to structure a new business or how to expand an existing business through franchising or opening and operating new locations. Each of those decisions has pros and cons from a business standpoint, but there are also legal issues in how to structure everything and comply with all the relevant laws,” Grant said.

“By having a joint interdisciplinary team, we’re able to advise clients on the legal side as well as the business side.”

Grant previously taught in the Entrepreneurship Legal Clinic at the University of Pennsylvania Law School, and recently launched the Entrepreneurial Law Clinic at Fordham last fall. The clinic at Fordham serves two types of clients: social ventures that seek to create positive change in society, such as ConBody, and companies founded by low-to-moderate income entrepreneurs who otherwise would be unable to afford an attorney.

In addition to ConBody, the clinic provides joint legal and business advice to Silicon Harlem, a social venture that aims to transform Harlem into a technology and innovation hub; Knock Knock City, which connects travelers and locals with local merchants willing to store their bags; and Raising Cane Farms, an organization dedicated to helping veterans make a living in agriculture. The clinic also provides legal advice (without the accompanying advice from business students) to numerous other startups.

Business With A Mission

Marte, whose Broome Street gym occupies the basement below a Buddhist temple, falls into the social venture category. It’s a spartan affair, with cinder blocks painted white, grey lockers, and a refrigerator with “S%&* is not free” written in black marker on the window.

Looks are deceiving though. Dig a little deeper and it’s clear that ConBody has some serious cache. Not only does one of the Real Housewives of New York work out there, but Marte has also had pop-up fitness studios at Saks Fifth Avenue and Lord & Taylor; a documentary about his story is being made; and in March, he published ConBody: The Revolutionary Bodyweight Prison Boot Camp, Born from an Extraordinary Story of Hope(St. Martin’s Griffin, 2018).

Plans for another location in Chelsea are underway, and Marte is looking to raise $2 million to expand beyond the 17 staff members he currently has.

“They’re absolutely geniuses. They shot me questions that I never really thought about, and I was like, ‘Oh, I should do that.’ They were really on top of their stuff, and really hungry in helping me,” he said.

“Some of them even came in and worked out with me.”

Marte has a business background of his own: He received business training at Defy Ventures, a non-profit that helps formerly incarcerated individuals start businesses. But the Fordham law students advised him on various legal matters, and the business students helped him finesse his fundraising pitch.

Perfecting a Pitch for Funding 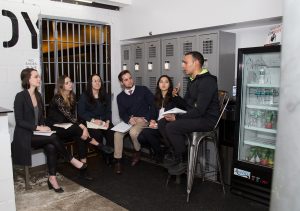 One of the goals of the clinic is to bring together people who work in other disciplines, to learn different ways of communicating.

One of them was Hollis Schwanz, GABELLI ’18. A 2011 graduate of the Fashion Institute of Technology, Schwanz came to Fordham for graduate school after working in fragrance and cosmetic marketing. A self-described boutique gym fanatic, she was familiar with ConBody before joining the project, which was a capstone project for her MBA. She was attracted to the opportunity to work with those in other fields.

“In my line of work, you deal with a lot of different people, and you have to learn how to best navigate that relationship when you don’t have a pre-existing one with someone. That’s not only the law students we’d never met before, but with the client as well,” she said.

Among the things Schwanz said she learned from the law team was the different types of intellectual property that can be used to protect a company’s brand.

Communicating with people who work in other disciplines is exactly what Grant had in mind when she asked Gabelli to partner with her clinic.

“The world into which these students are going is an interdisciplinary one where they’ll be working in teams. This collaboration in the clinic allows the law students to learn business lingo, and the business school students to learn legal jargon,” she said.

Anthony Palma, an adjunct instructor who supervised the business students, said the collaboration was a seamless one.

“They met, they arranged their meetings around everyone’s schedules so everyone could participate. All the students worked incredibly well together,” he said.

“There’s no doubt in my mind that Coss is going to achieve his plans and his dreams. He’s on the right track.”

Lessons for the Real World

Fannie Law, a rising third-year law student, was excited to be a part of something new. She and students such as Kajon Pompey, who is pursuing a joint JD/MBA, were instrumental in helping Grant create a podcast that the clinic will launch in the fall. Like Schwanz, Law was inspired by Marte’s goal of reducing recidivism by hiring and training formerly incarcerated individuals.

“Coss and his associate Scott were really forthcoming in their ideas for the growth of the business, and how we could help them accomplish their goals. They were both really down to earth and easy to talk to,” she said.

“Being in a clinic was one of the most rewarding things and informative things I’ve done. I felt it really prepared me for the real world, and I feel a lot more confident in myself and being a lawyer.”