At a keynote discussion on Nov. 30 at the Lincoln Center campus, the media mogul argued that social, environmental, and governance issues like population growth, climate change, and technological advances can influence stock price performance and a corporation’s value in the long run.

“[Sustainability] is in the world’s interest and the companies’ interests,” he said.  Bloomberg, who has been a global leader on climate action for the business community and local governments, pointed out that long-term oriented investors tend to align with companies that are the “most resilient to catastrophe and efficiently-run.”

The panel discussion, moderated by Mary Schapiro, former chair of the Securities and Exchange Commission (SEC), also featured William McNabb, chairman and CEO of the mutual fund giant Vanguard. It was part of the 2017 Sustainability Accounting Standards Board (SASB) Symposium, which was hosted by the Center for Professional Accounting Practices of the Gabelli School of Business. Focusing on market forces at work, the daylong event offered industry observations on sustainability disclosure, market standards, and investor demands from leaders of top companies such as JetBlue, UPS, Goldman Sachs, and Bank of America. 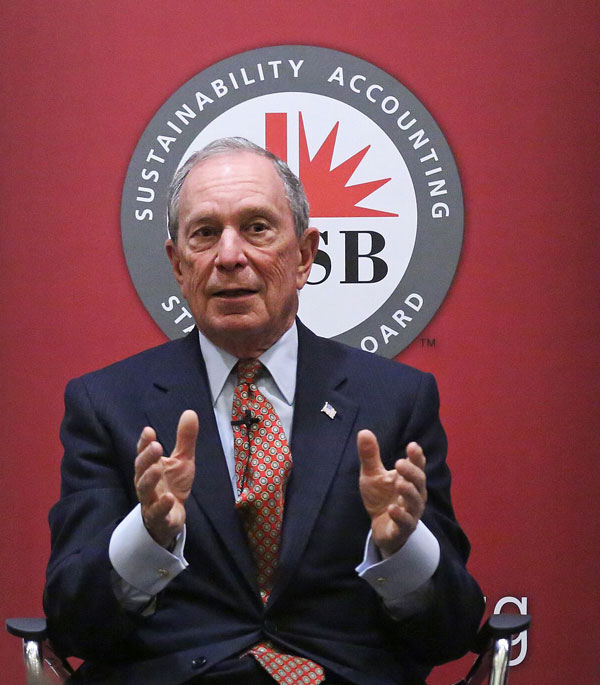 As head of a company that represents more than 20 million investors worldwide, McNabb penned an open letter this past August to directors of global public companies in Vanguard’s portfolio, in which he said that companies must stay abreast of risks and opportunities because they help boost shareholder value.

“If one company is doing a really good job of disclosing risks—whatever the risks may be—it allows you as an investor to have a much better perspective on what that company might be worth going forward,” he said. “I think as an investor that’s what you want to be doing.”

But investors aren’t the only ones paying attention. Bloomberg, who serves as the U.N’s Special Envoy for Cities and Climate Change as well as chairman of the SASB Foundation board in addition to a host of other environmental organizations, said more people are gravitating toward companies that are making sustainability a priority—from prospective employees to new customers.

“In this day and age, when you’re recruiting young people out of college, they are interviewing you,” he said. “And they’ll say, for example, what are you doing in the climate area? So, it’s a real competitive thing to do well, and we keep trying to point that out to companies.”

To help companies improve sustainability disclosures in SEC filings, SASB has developed industry-specific sustainability accounting standards. According to Bloomberg and McNabb, this creates transparency and gives companies a competitive edge.

“We’ve always had a saying at Bloomberg that ‘if you can’t measure it, you can’t manage it,’” Bloomberg said. “So, if investors want to look at what companies are doing, we make it easier for them to do it.”

The finance giants project that the marketplace, and not regulators, will be the most influential in bringing sustainability standards closer to the forefront. Bloomberg said that this is because, “it’s almost impossible to write one law that covers everything.”

For McNabb and Vanguard, the goal is for the market to coalesce around a framework that encourages companies to provide consistent and comparable disclosure.

“It’s pretty hard to argue that being well-governed is going to hurt your value,” he said.